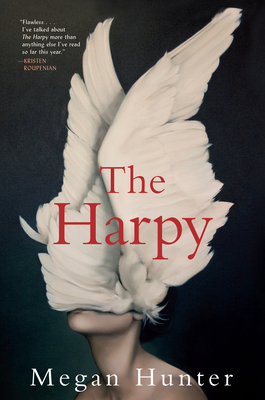 Part revenge tale, part fairytale, The Harpy is an electrifying story of marriage, infidelity and power by the author of the #1 Indie Next Pick, The End We Start From, Megan Hunter

Lucy and Jake live in a house by a field where the sun burns like a ball of fire. Lucy has set her career aside in order to devote her life to the children, to their finely tuned routine, and to the house itself, which comforts her like an old, sly friend. But then a man calls one afternoon with a shattering message: his wife has been having an affair with Lucy's husband, Jake.

The revelation marks a turning point: Lucy and Jake decide to stay together, but make a special arrangement designed to even the score and save their marriage--she will hurt him three times.

As the couple submit to a delicate game of crime and punishment, Lucy herself begins to change, surrendering to a transformation of both mind and body from which there is no return.

Told in dazzling, musical prose, The Harpy is a dark, staggering fairy tale, at once mythical and otherworldly and fiercely contemporary. It is a novel of love, marriage and its failures, of power, control and revenge, of metamorphosis and renewal.

MEGAN HUNTER's first novel, The End We Start From, was published in 2017 in the UK, US, and Canada, and has been translated into eight languages. It was shortlisted for Novel of the Year at the Books Are My Bag Awards, longlisted for the Aspen Words Prize, was a Barnes and Noble Discover Awards finalist and won the Foreword Reviews Editor's Choice Award. Her poetry, short fiction and non-fiction has appeared in The White Review, the TLS, Literary Hub, BOMB Magazine and elsewhere. Her second novel, The Harpy, will be published in 2020.